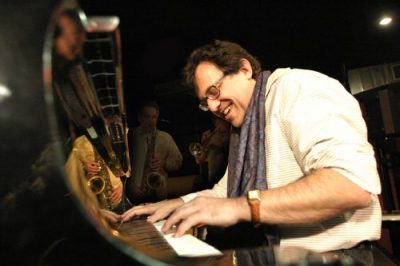 Born in Sofia in 1948 in a family of musicians, Mario begins the piano at the age of five, and discovers improvisation as a teenager, while at the same time integrating the Lycée musical. At 22, he creates his quartet which will be one of the most listened to trainings in Bulgaria. His studies (piano, composition, orchestration and direction) finished, he works with the biggest names in jazz of the Eastern countries. Then, in 1980, he left Bulgaria and settled in Lyon.

Since then, he has followed concerts, composition and teaching. In 1984, he founded the jazz department of the National Conservatory of Lyon.
He has performed in Europe, America and China, solo or in formations ranging from the duo to the big band, and with musicians like Ron Carter, Enrico Rava, Michel Perez, Jay Anderson…
Among his compositions are Portraits for Brass, Percussion and Piano (Sofia, 1980), Piece No. 1 for String Quartet and Big Band (Lyon, 1989), Collages for Contemporary Ensemble and Corsican Voices (Bastia, 1992), Suites East-West for Bulgarian Voices and Jazz Ensemble (Tbilisi, 1997), Instrumental suite for guitar and piano, Climats, three pieces for guitars and string quartet, and Banana for combo and string quartet (Thionville, 2006).
He teaches at the Lyons National Conservatory and teaches at the IMFP in Salon-de-Provence. It was here that Mario Stantchev Sextet was formed in 1998 (M. Barrot, F. Castellani, R. Nikitoff, D. Del Aguila, JL Di Fraya). Since 2008, he has worked with the Mario Stantchev New Trio (D. Del Aguila On the double bass, R. Merlinc on drums).