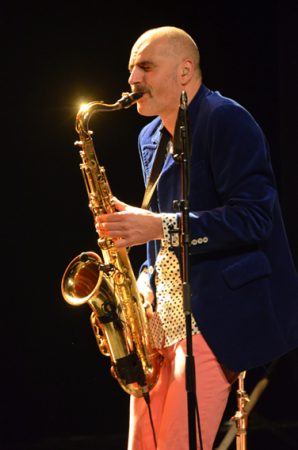 Lionel Martin is a prolific musician who multiplies experiences and projects. Recognized Jazzman he pursues an atypical path.

He began the saxophone classically at the school of music at the age of 7. His influences range from Sidney Bechet to John Coltrane through … the Béruriers Noirs, the flagship group of the French punk and alternative scene 1980s. And very soon he prefered practice, improvisation. Even today, he is as comfortable in international festivals as at the corner of the street, where he draws energy that is constantly renewed.
Encouraged in the personal and without compromise way hechose by determining meetings, Steve Lacy or Louis Sclavis – with whom he has the opportunity to play several times – he develops his trio (spotted by the Afijma and the Network Follow the jazz) with Vincent Courtois, Laurent Dehors and Francois Thuillier.
Active on the international scene, he plays Cuba in the orchestra of Luc Le Masnes alongside the saxophonists of Irakere … He defends his involvement in the Trio Resistances (with Bruno Tocanne and Benoit Keller).
With the group uKanDanZ, group of ethiojazz with the energy rock, he records two disks and connects concerts and tours in the world.
In parallel, Lionel Martin also works on acoustic forms with accordionist Jean-François Baëz and pianist Mario Stantchev. Listening to his game by a close friend of the saxophonist Stooges Steve Mackay will also allow him to participate in a tour of a fortnight with the legendary band …