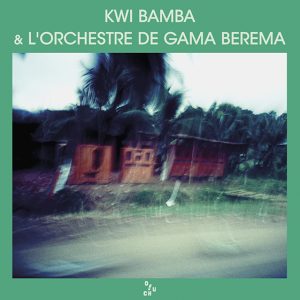 The album Kwi Bamba & the Orchestra of Gama Berema is the seventh production of the label Ouch! Records. It opens a window to a very unknown musical world: the federal orchestras of Guinea Conakry instituted after the independence of the country by President Sékou Touré…

Both historical document and musical nugget, the album was recorded on the field at Gama Berama, Ivorian border, in 1999. Behind the microphone ECM-MS 907 Sony connected to a Sharp MD-MT 20 MiniDisc Recorder: Frédéric Migeon, artistic director of jazz and world music in the French label Cristal Records. The release of this album on Ouch! Records is his idea.

This album is the 3rd collaboration of the Ouch labels! Records and Crystal Records.

A bit of history

Sékou  Touré, the first president of Guinea Conakry, from his accession to power in 1958, has been betting on the promotion of national culture.  In particular he developed the creation of federal orchestras composed of musicians with the status of civil servants… These orchestras – including the most well-known, Bembeya Jazz, Beyla Orchestra, the Nimba jazz of N’Zérékoré, the Kaloum Star of Conakry or the Amazons of Guinea composed exclusively of women gendarmes – found their inspiration in the traditional music Mandingo, Soussou, and other ethnic groups living in Guinea, but with a modern instrumentation incorporating electric guitars and basses, drums, percussion and a brass section.  Their musical productions were set on the Syliphone label, a state governance established in 1967, which released 150 references until its disappearance in 1983.

Kwi Bamba was the saxophonist of the Nimba jazz of N’Zérékoré and appeared on the album « Gon Bia Bia », the LP of the Nimba, published in 1980.  The Nimba Jazz had the originality to use the rhythms and songs so peculiar to the animist ethnic groups of the Forest Guinea region, in particular the ethnic Guerzé (or Kpellé).  The band will then dissolve, but Kwi Bamba can motivate young musicians to keep the band alive….  When Frédéric Migeon met Kwi Bamba, in 1997, the blessed era of music as a propaganda tool of the regime of President Sékou Touré was gone;  and Kwi, simply to be able to play music daily was part of the military band of N’Zérékoré.  The fanfare also allowed him to benefit from the loan of an instrument, however the reeds were not supplied to him and he had to make them himself (and therefore blow very, very hard)…

Frédéric Migeon explains: “One day, Kwi, with whom I had already recorded pieces of the Nimba Jazz reformed with young musicians and singers, proposes to me to record an orchestra of which he had been a part and whish make an audio cassette intended for sale and promotion…  Appointment is taken and a Saturday we go with Kwi, to Gama Berema, chief-place of sub-prefecture in the prefecture of Lola, on the border Ivorian.  To make a good recording « studio », without public, the group commandeered a house under construction;  It turns out that the room is too small to hold the group with amps and speakers, XXL models from the Soviet Union;  Also moving the material in front of the building, presence of the public to attend the recording and background noise (finally unfortunately not too much at the bottom!!)  of the generator supplying the audio system… After a few liters of raffia wine indispensable to any event in Forest Guinea, recording in one take of course, with a false start, microphones whistles, a motor that purrs, and a recorder small Mini disc that forces me systematically to make listen to the musicians a test piece to assure to my material, as well as to me a little credibility… The recording is done, and a few weeks later circulates an audio cassette in Guinea forest, duplicated in Ivory Coast, with a jacket where there is no credit, but the main thing is above all that the music exists, not?  2018, the years have passed, the village of Gama Berema, as the rest of the region was not spared by the ills, between the Liberian child soldiers and the Ebola virus…  « Master » Kwi was already old, I caress the hope that he or his descendants can listen to this album….  I am happy that this moment of music can continue to live… “

Before being project manager and artistic director of jazz and world music in the French label Cristal Records, Frédéric Migeon has worked in rural development in Africa in an Traduction en Anglais. non-governmental organization.  At the same time he carried out actions in the musical field and was one of the organizers of the St Louis Jazz Festival in Senegal from 1993 to 1996. And then stationed in Guinea Conakry, also in parallel with his professional activity, he recorded traditional music from the region of Guinea forest and accompanied the reformation of the Nimba Jazz of N’Zérékoré. It was on this occasion that he met and bonded with frienship with the saxophonist Kwi Bamba. In addition to the Nimba Jazz, Frédéric was able to record Kwi Bamba with the trio de Kellen de Tilépoulou, and with the orchestra of Gama Berema…