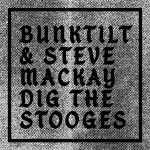 In the spring of 2014, Bunktilt – three jazz musicians, Lionel Martin (sax), Fred Meyer (guitar), and Thibault Martin (drums) – ignited the audience during a memorable tour of fifteen concerts with Steve Mackay, historical saxophonist of the Stooges, time of the album FunHouse.

An outpouring of electricity and energy, a molten lava, Bunktilt explores the Stooges repertoire to extract the essential marrow, and produce new music, bordering on free jazz and punk. Their intense concerts leave no one indifferent. The album Bunktilt and Steve Mackay Dig the Stooges  allows us to rediscover the intact energy captured during the concert given in Dunkerque, at the 4 Ecluses on March 29, 2014.

At the origin of this extraordinary adventure, the shock of the rediscovery of Funhouse on vinyl by Lionel Martin. He created the group Bunktilt with the idea of going to the source of this energy and this unique sound… The meeting with Steve Mackay, thanks to a mutual friend, Ferid, owner of the Thé Troc store on Rue Jean-Pierre Timbaud in Paris, allows them to go to the end of the dream.

Tell me a little bit about Carnal Kitchen and your beginnings with the Stooges?
My best friend in Middle and Secondary School, Marco Lampert, taught himself to play the drums, and it had been our dream to have a free-form improvisational group, which we did establish in Ann Arbor, Michigan. We called ourselves « Carnal Kitchen » (a not-so-veiled reference to Oral Sex!) and would often just show up in a public place and play… One of our first more high-profile performances was at a big Art School party, and I was surprised and pleased to see my Ann Arbor Friend Iggy right up front!  This is when he decided to steal me from Carnal Kitchen and take me to Los Angeles to record « Funhouse », the Stooges second Record. That was only supposed to be for 6 weeks, but it turned into 6 months of touring the United States! 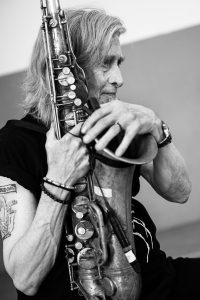 What is your best memory (and worst!) with the Stooges?
Towards the end of that time, things started to deteriorate (Heroin) and I was actually glad when Iggy fired me!  We always remained friends though… Best Memory from then? Our show at a place in New York City called Ungano’s, where we really got experimental!  (There is a cd of that performance, « Have Some Fun » which I had to Buy a copy of!)
Worst Memory ( more funny than painful to recall) was a few months after I left the Stooges: (The Late) Scott Asheton drove a 12-foot high Equipment Truck under a 10 1/2 foot railway bridge and was injured, fortunately not seriously but unable to play with the band in Detroit the following night.  Iggy and Ron Asheton remembered a time when I played drums (I am barely competent) for a rehearsal when Scotty went missing, so they decided to have me fill in for him. A very perfunctory (de pure forme, superficiel) practice with sticks on top of an amplifier found me behind Scotty’s kit at the Eastown Theatre to a (traditionally) hostile Public. We started the first song (all new material unknown to me) and Iggy had to come back to me, grab the sticks out of my hand, and show me the beat he wanted, then give me back my sticks. This happened on every song we did, quite embarrassing to me at the time, but now I look back on it and Smile!

What do you think you brought to the group?
What did I bring them?  Together we originated Free Jazz meets Punk Rock, which is why « Funhouse » is just about the most legendary Stooges, or Iggy Pop record! What did they bring me? The chance to realize that I wanted to be a Professional Touring Musician as my Life’s Work!  I quit the University soon thereafter: the Art School wanted me to decide whether I was a Musician or a Graphic Artist!
(Yes, I did a few Bandes Dessinees for Creem Magazine back in 1970, but it has been Flyers and Layouts since then…)
What’s next? What was your background?
Afterwards I was allowed to rejoin Carnal Kitchen, but with the understanding that we would play Jazz Standards, which turned into a sometimes difficult but very educational opportunity for me to advance my playing!
Carnal Kitchen broke up in 1972, but I was then asked to help form « Mojo Boogie Band » (Blues eventually turning into Bob Seger-Style Midwest Rock) with whom I played until the end of 1976, when I moved to the San Francisco Bay Area, where my friends in « Commander Cody and His Lost Planet Airmen » (Rockabilly, Country-Western, and Boogie-Woogie) had found success. I was only looking for a referral but ended up joining « The Moonlighters » a spinoff of Cody with a Record Deal! Soon after that we became Cody’s band again, and I played with them 1978-82, including my first trips to Europe! I left that band in an attempt to save my (common-law) Marriage ( It was too late!) and got a job as an Operating Engineer in Water Pollution Control (Sewers) for the City of San Francisco!
In late 1982, I was invited to join « Snakefinger’s History of the Blues » (the late Philip Lithman, best known for his work with The Residents) and we ended up touring Europe in late 1983 (there is a recently reissued record of our live show). I stayed on in Europe after that tour, playing with a Dutch Blues Band and living in Amsterdam until my friends the Violent Femmes came through town and hired me as a backup saxman,and bringing me back to the ‘States at the end of 1984. I got myself involved with, and married, a very Volatile woman, who did not want me touring, although she and I formed another San Francisco version of Carnal Kitchen (she was a very good singer and competent bassist).We divorced officially in 2001.
It was during this time that I became an electrician, first learning the trade working for others, then independently, for nearly 20 years, only playing occasionally in San Francisco. Starting in 1998, I was so very fortunate to become partners with Patricia, who has been so supportive of me and my music , and my travels.  And then came The Call from Iggy in 2003 about the Stooges Reunion and a wonderful run of that show for the next 10 years.